Thank you for an amazing Freedom Not Fear 2022!

More than 100 people gathered at Mundo-b in Brussels for Freedom Not Fear (FNF) on the first September weekend of 2022. This year’s un-conference marked a return to a presence meeting, which had been sorely missed in the last two years.

Freedom Not Fear 2022 focused on data retention, chat control, platform power and the Digital Markets Act and Digital Services Act, public and private surveillance technology. For an impression of the variety of content offered, see the full programme.

The weekend section was started with a keynote on Friday evening by Jane Kilpatrick from Statewatch. The keynote highlighted surveillance technology at the European Union’s borders and its multiple impacts on people’s rights. 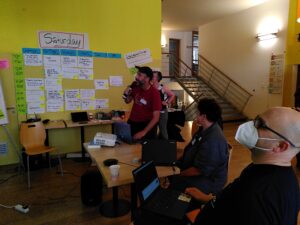 Nic is presenting the benefits of CiviCRM (Sapi_cc-by-4.0) 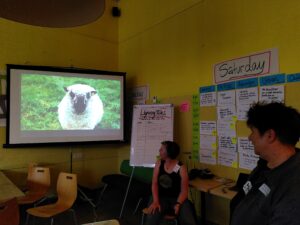 Rena Tangens showing a clip on the Irish DPC (Sapi_cc-by-4.0)

The whole FNF weekend was a rich offering of networking, workshops by and for civil society activists, socialising, Belgian beers, an African dinner and more. It also included discussions with three of the MEPs who kindly supported us, which was a welcome extended opportunity to meet European policy makers. These conversations had mostly been confined to the FNF Monday in previous years. 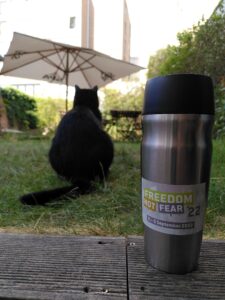 FNF “Advocacy Monday” started with the “official” meeting at the European Parliament’s visitor facility, complete with photo opportunities in front of all EU Member State flags and in the plenary “hemicycle”. This was followed by more meetings with the MEPs who had officially invited us and others in the European Parliament. During the 4 days of the event there were several chances connecting with MEPs to discuss some pressing questions and advocate policies for fairer digital societies. 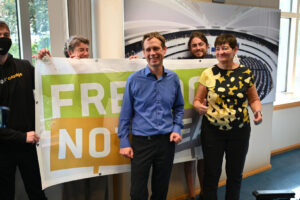 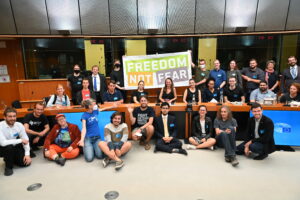 Meeting with MEP Saskia Bricmont in the EP (PetraSchmidt_cc-by-sa-4.0)

The overall feeling voiced by those present was one of delight, for the chance to revive connections that had been restricted to video links for so long, and of gratitude for an event that went smoothly. This would not have been possible without a dedicated organising team that had been working hard over several months, and enjoyed doing so.

Our heartfelt thanks go to: 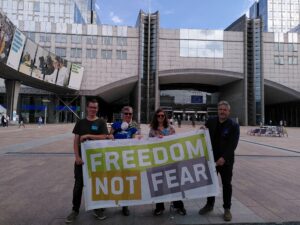 FnF banner in front of EP after the official visit (Sapi_cc-by-4.0)